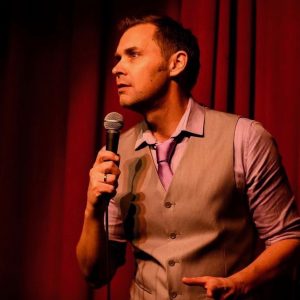 Brad Lawrence is a storyteller, solo show performer and teacher who has performed to sold out crowds around the United States and in the UK. He got his start as a storytelling teacher conducting workshops at the Edinburgh Fringe Festival. He then went on to become a story coach for the RISK! podcast and live shows and an instructor for The Story Studio. As a storyteller, Brad was the first person to win back-to-back Moth GrandSLAMs, which led to him becoming a host of the Moth and a regular on Moth Mainstages around the United States. He has co-produced and performed in storytelling, solo, and variety shows at the Edinburgh Fringe Festival, South By Southwest Interactive, and in conjunction with WBUR, USA Television Network, Casper Mattress, and Grant’s Whiskey. He has taught Storytelling for Business and Corporate Professionals and lead workshops for Fortune 500 companies in the US and in Europe. His writing has appeared in McSweeney’s.