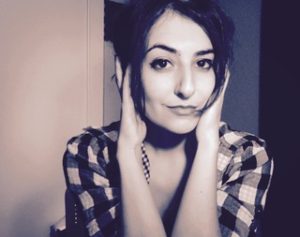 Elaheh immigrated to the U.S. when she was 11 years-old, leaving behind her birth country, Iran. Upon leaving, she was heartbroken, nostalgic, angry, and confused. The feelings grew stronger as she struggled to assimilate to her new home, leaving her to battle a depression that brought her down for years to come. She found writing as an outlet to express her emotions. She obsessively delved into the topic of nostalgia and all the things she missed about Iran.

Today, Elaheh strives to live a creative life by bringing people together through art. She is the founder of the showcase series, “Immigrants & Exile: Stories of Nostalgia & Longing,” which brings together storytellers, musicians, comedians, poets, and other artists to tell their stories. This showcase began as a need to create an atmosphere in which artists have a space to share their feelings of nostalgia, longing, and exile. She believes that you do not have to be an immigrant to understand or relate to the concept of exile.