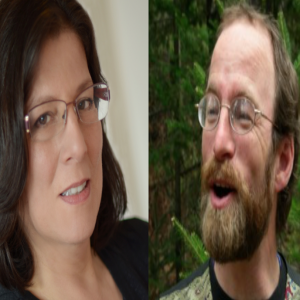 Ivy Eisenberg is an award-winning humor writer, storyteller and comedian. She’s been telling stories in various venues throughout the Greater NYC area and in Washington, DC since 2010. She emcees and co-produces the popular monthly storytelling and pie-bake-off series “Pros(e) of Pie” north of NYC. In 2017, Ivy performed her solo show “Loud, Large and Funny,” a tale about finding her way out of the depths of despair after being sucker-punched, in her late 50s, with a surprise layoff from a corporate job. She is working on a new solo show called “No Chicken.”

Andy Davis got his start as a storyteller telling comic tales by candlelight in Mexican refugee camps 25 years ago. He has since broadened and refined his craft, and has entertained audiences as far north as County Antrim, as far east as Paris, as far south as Bamako, and as far west as San Diego. By day he keeps the world safe for freethinkers, dissidents and change-makers as co-director of the World Fellowship Center, a peace and justice-oriented family camp and retreat center in the White Mountains of New Hampshire.