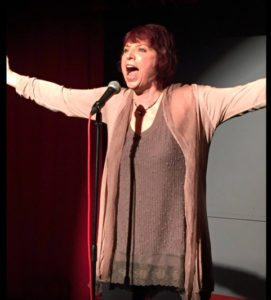 Jude Treder-Wolff: is host/creator of (mostly) TRUE THINGS storytelling show which is performed in 2 locations on Long Island, at The Pit Loft in NYC, for events around the country and has a teen edition. Her new solo show “This Isn’t Helping” was selected for the Speak Up! Rise Up! storytelling festival in NYC. She is a writer/performer, singer, storyteller creative arts psychotherapist and Applied Improviser and has been a featured storyteller on RISK!, Talk Therapy, Now You’re Talking, Take Two Storytelling, Prose of Pie. Her solo storytelling show Crazytown: my first psychopath was selected for the 2013 Midtown International Theater Festival and the 2012 Chicago and San Francisco Fringe Festivals. Crazytown has been performed at The Pit-The Peoples Improv, Actors Theatre Workshop and Broadway Comedy Club in NYC, The Charles B Wang Center at Stonybrook University, The Examined Life Conference at the Carver College of Medicine at The University of Iowa, and The Conservatory NJ. She has performed solo cabaret/comedy shows in NY and around the country for the past 20 years and won Stand Up New York’s Funniest Person From The Suburbs in 2004.