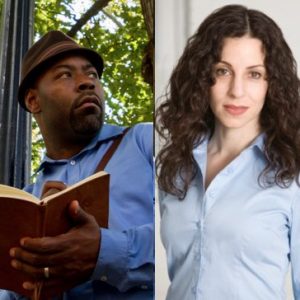 Marc L. Abbott is the author of the YA novel The Hooky Party and the children’s book Etienne and the Stardust Express. He is the director of the horror short SNAP and the online horror series Anthorrorgy. A two-time nominated actor, a 2015 Moth StorySlam and GrandSlam winner. He has performed at RISK!, Yum’s the Word, Now You’re Talking! & BadyHouse Storytelling Concert. He is the host of the monthly storytelling show Maaan, You’ve got to hear this! at Precious Metal in Bushwick, Brooklyn. He has written and performed two one man shows; Of Cats and Men: A Storytellers Journey and Love: African-American Style which was featured at the EATS festival at the TADA Theatre. He is also co-host of the podcast Beef, Wine and Shenanigans which airs twice a month and a member of the HWA.

Born and raised in Brooklyn, NY, he still calls the borough his home. Visit his website www.whoismarclabbott.com for more on his work and future appearances.

Cyndi Freeman is a two-time NY Fringe Festival award winning solo performer. Her solo shows have been presented in New York, Boston, Amsterdam, Ireland, London, Edinburgh and Edmonton CA. Ms. Freeman is a recipient of a grand prize playwriting fellowship award from the Massachusetts Cultural Council. Her performing credits include HBO, Showtime, The Colbert Report on Comedy Central and storytelling shows The Moth, Stories From The Stage and RISK! As a teacher, Ms.Freeman is a lead instructor with The Moth Community program, The Story Studio, and is the founding member of Stories Of New York – Seniors, an organization that brings storytelling workshops to senior citizens in Brooklyn, NY. She is also a story coach for the RISK! podcast.