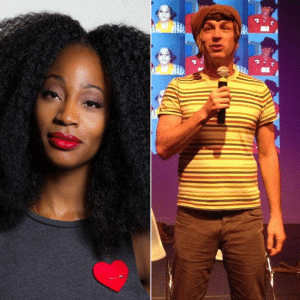 Marie Faustin is a NY-based comedian and actress and one of the fastest rising talents on the comedy scene. She was a 2017 “New Face of Comedy” at the international Just For Laughs Comedy Festival in Montreal. Marie has appeared in GQ Magazine, MTV’s GirlCode, MTV2’s Vidiots, VH1’s All Jokes Aside, BET’s SocialAwards and TruTV’s Late Night Snack. From 2016 – 2017, Marie was the host of Oxygen’s Very Real Talk. She’s a regular feature in Time Out NY and is the on-air host of 99.5FM’s “Tall Tales in the Big City.” Marie also co-hosts the weekly podcast: The Unofficial Expert.

Harmon Leon the the author of seven books. His latest is: Meet the Deplorables: Infiltrating Trump America. His stories have appeared in VICE, Esquire, The Nation, National Geographic, Wired.Harmon has appeared on This American Life and The Howard Stern Show and has performed solo shows comedy around the world, including the Edinburgh Fringe Festival, Melbourne Comedy Festival, and Montreal’s Just For Laughs.  He also produces the storytelling series TALE, VideoTALE, and StoryFest: A Festival of Storytelling.