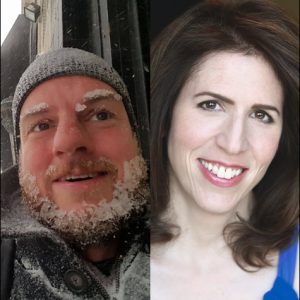 Robin Gelfenbien is a NYC-based storyteller, writer and comedian who has performed at The Moth, RISK! and Mortified. She’s the Creator and Host of the storytelling series and podcast, “Yum’s the Word,” that features her homemade ice cream cakes. The show has been named a New York Times and Time Out New York Critic’s Pick. Guests have included Tim Gunn, Jason Biggs, Joy Behar and stars from “Orange is the New Black.” New York Magazine called her solo show, “My Salvation Has a First Name: A Wienermobile Journey,” “the highlight of the Fringe” and Time Out New York gave it 4 stars. She’s performed her original comedy songs at The Kennedy Center, Lincoln Center and on Sirius Radio. She’s also been featured in Marie Claire magazine and she starred in a commercial directed by Spike Lee. www.robingelfenbien.com  |  @robingelfenbien  | @yumsthewordshow

Jeff Rose writes fiction and tells stories. He’s the co-host and co-producer of the storytelling show “New York Story Exchange” at Cornelia Street Cafe and the monthly variety show “I Have A Crazy Idea” at Branded Saloon. He’s a Moth Storyslam champion and has been featured on WBAI’s Tall Tales in the Big City, the Bady House Concert, Now You’re Talking, Word-Up No Name Super Storytellers, Sideshow Goshko, Word at the Sidewalk Cafe, Rimes of the Ancient Mariner, Friday Night Stories, among others.