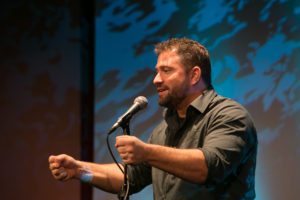 Scott Whitehair is an international storyteller, producer, and instructor from Chicago, IL. He is the host of This Much Is True, one of the city’s longest running personal narrative series, creator of Story Lab Chicago, which has put 450+ new tellers on stage since 2011, and director of Do Not Submit, a citywide network of  grass root open mics with the goal of bringing neighbors together through story. He tells stories anywhere someone will listen, including festivals, pubs, slams, theaters, and parking lots, and has appeared on NPR, Sirius XM, and the Risk podcast. Scott’s independent class has been selling out monthly for the last five years, and he spends his afternoons helping companies, non-profits, and individuals develop their voices as storytellers. When he is not telling or teaching, you can find him in a sauna, in front of a grill, or sleeping in a hammock. Check him out at scottwhitehair.com