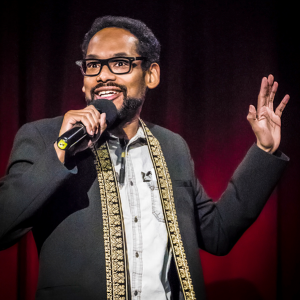 A New England native, Wes Hazard has been named as one of “5 Boston Comedians to Watch” by The Boston Globe Magazine. A writer and storyteller as well as a comedian, Wes brings wit, energy and honesty to the stage, qualities that have made him a regular performer in Boston venues as well as at The Boston Comedy Festival and The Women in Comedy Festival. Wes is a multiple-time winner on The Moth StorySLAM stage and he’s appeared as a guest on the Comedy Bang! Bang! Live! podcast and The Story Collider podcast. His debut humor book Questions For Terrible People was published by Simon & Schuster in 2016, and in 2017 he was awarded a New England Emmy for his hosting work on CBS Boston’s The Secret Worlds of Boston Comic Con. He currently co-hosts the national storytelling television program Stories From The Stage on PBS and in 2018 he appeared on Jeopardy!